Labels: asp.net, bestpractices, book, claims, codefirst, EF, PowerShell, readingnotes, sharepoint
For the last months I read few technical books.  I thought it could be interesting to add it.  This is not a complete review and it only reflect my personal opinion. 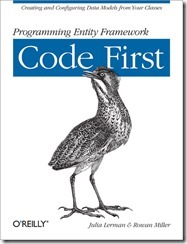 Note: By the time I write this post the version of Entity framework is 5.0.
Even if this book was about the previous version of Entity framework, it’s a golden mine of information. I found very useful the example that helps me to understand how to define the relation and more importantly what was the deference between the attribute way and the fluent way. It was easy to read, because well explains not because it was doing only the “beginner” stuff. Since EF is really useful when starting a new project or even for a POC, I think this book should be in all developer’s bookshelf. 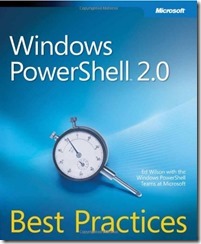 If you are a .Net developer and you still don’t know PowerShell or don’t know why you should consider PowerShell than this book is not for you… You should read some Introduction books or post THEN read this book.
This book is all about best practices. It will help you to structures your code or your library of scripts. That way, you will be able to understand and found and reuse all of it. Whether to do something in a build or to deploy something in Windows Azure or even just to quickly do a repetitive task this book will help to do it.  A book to keep nearby. This is definitely THE book to get started with claims. It starts right at the beginning explaining what’s a claim, why we should use it.  Many different scenarios are presented. Each of them is presented with and without claims and most of the time how to migrate from one to the other.  The complete solution is available on codeplex.com and if a PDF is good enough for you; it's also available on codeplex for free.
Building N-Layered Applications with ASP.NET 4.5 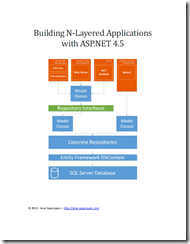 This document is, in fact, a series of post about the best practices related to Asp. Net 4.5. While writing this notes, only two or three posts were available online. To get the full document with the source code you must pay. Eventually, all parts of the rich document will be available for free, but it's only 20$ and its own is value.
The solution explained in this document is simple enough so it’s easy to understand the architecture but detailed enough to cover most of the case.  The solution will include a lot of technologies like: Entity Framework, Asp. Net MVC, WCF Services and many patterns: Dependency Injection, Repository, Unit Test, Mocking, etc.
It’s a really well done document, and I think it’s a must to any web developer or architect.
Microsoft SharePoint 2013 App Development 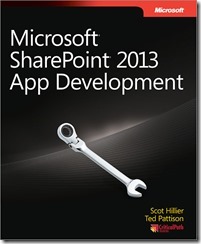 I read this book to know more about the new “Apps” thing.  While I was ready, I understand that my project was not a good match for SharePoint App, so I didn’t finish it… yet. However, I found the book explications really clear, and it gives me all the tooling and options I needed to get started.
Since Apps are now very present in SharePoint, I decided to include it in my notes. 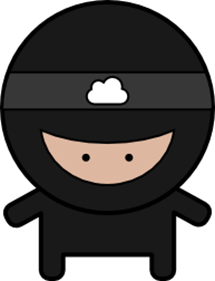 [This week, the image is provided by Marc Gagné @marc_gagne, a Windows Azure Ninja.]
Cloud